Until June of this year, we had a Qualified woodburning cookstove in our house kitchen.  I had ordered it from Lehman Hardware back in 1997 when I lived in the little house on our farm.  I cooked on it a little over a year in that house, then it got a year's vacation when I moved into the big farmhouse.  Once I had the old kitchen chimney re-lined with stainless steel pipe during the next summer, the Qualified was again in use.  This stove has cooked a great deal of food (including four or five Thanksgiving Dinners), done a lot of canning, dried a lot of clothes, heated a fair amount of water, and saved us a ton of money in home heating.


As I mentioned in earlier posts, we are currently remodeling our house kitchen.  There is nothing wrong with the Qualified, but we wanted an airtight firebox (I don't much enjoy middle-of-the-night trips downstairs from a warm bed to refuel) and a stove that would heat our hot running water.  As a part of the remodel, we removed the Qualified in June and ordered a Margin Gem cookstove from Stoves and More Online.  It arrived this month and now sits awaiting the kitchen remodel to be finished.  We named the stove Marjorie because Marjorie the Margin Gem seems to have a nice ring to it.

Marjorie was shipped from the Canadian factory to the Conway trucking terminal nearest us, and I went to pick her up after school a couple of weeks ago.  She spent a few days in the back of my grandma's pickup in a shed here on the farm, and then we uncrated her and invited helpers over to put her in the utility room for right now.  There she will sit in a sad state of disassembly until the kitchen is ready.

I wanted to post a few pictures that may help to illustrate how she was crated since I was quite curious to know about this before she arrived.  I'll apologize right now for ruining the pictures by being in them.  As you can see, I was not in charge of the camera. 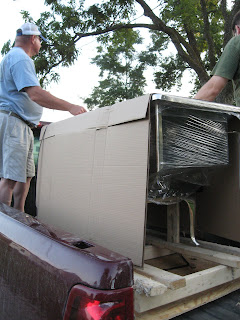 We can't wait to get it installed, but we have a long way to go before the kitchen will be ready.  My goal is to have Marjorie employed by November.  We'll see.
Posted by Jim at 8:21 PM